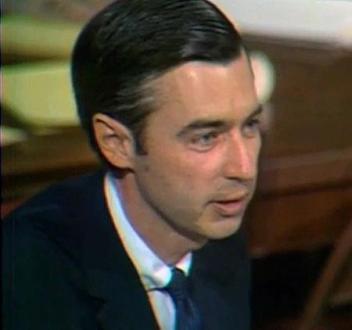 When “Won’t You Be My Neighbor?” premiered in my hometown of Salem, OR on Thursday evening, June 28, I thought I already knew what to expect from the film and the audience. Considering the film had premiered in a number of big cities two weeks earlier, I thought I’d absorbed every online detail about what critics thought of it and audience reactions.

While this personal mindset usually held true for some films I’ve reviewed (Twitter’s liability), the revelations in “Won’t You Be My Neighbor?” were far greater than I planned. Even more gratifying was seeing it with a full house where the responses were a compelling component to the film itself.

If you saw a PBS documentary in March about Fred Rogers called “It’s You I Like” (hosted by former stagehand on the show, Michael Keaton), you’re in for something far different with this new film. As excellent as the former documentary was, “Won’t You Be My Neighbor?” dives deep into who Fred Rogers was as a person. Director Morgan Neville manages to not only bring us one of the most probing portraits of the subject’s psyche, but also places all world events of the last 50 years into an all-encompassing perspective.

We learn Fred Rogers grew up in a wealthy Latrobe, Pennsylvania family, yet ultimately lonely and unable to properly express his feelings. It’s here where we see how he shaped his TV mission for children, despite wanting to initially start a career in the seminary as a Presbyterian minister. As a result, we discover how he used his show almost as a form of therapy for himself.

One word you hear occasionally in the film is “radical”, which might sound like an odd fit in describing the genteel Fred Rogers. Yet, as you watch the film through, you see exactly how radical he was in understanding the soul of young children and even sophisticated adults. Considering he took on television rather than the ministry, you can best describe his role as a reluctant TV revolutionary.

To give you more detail about the film’s ensuing revelations, it’s best to tell you through the reactions of the audience surrounding me.

An Audience Attentive to Every Word

It’s sometimes too easy to segment an audience based squarely on appearances and how they interact. As a social observer (and being at the movie by myself), I listened to surrounding conversations while watching every person file in.

The audience for my screening was mainly adults ranging from Generation X to Baby Boomers. However, a number of kids ranging from mid teens down to eight years old were also there. I wondered to myself if they’d ever really seen “Mister Rogers’ Neighborhood” since it hasn’t aired on PBS in over a decade. Some of the classic episodes are available on YouTube and other online sources. Still, one can only hope their parents turned them on to the show.

I could better differentiate the audience demographics during varied reactions to the film. What’s going to surprise you the most about “Won’t You Be My Neighbor?” is the amount of laughs it has, especially a few dirty jokes about the show’s production.

The one that made adults laugh the loudest was a story from one of the show’s longtime stagehands about taking mooning shots of his bare ass on Fred Rogers’ camera as a practical joke. Later, we learn Fred saw the picture, blew it up to poster size and presented it to the stagehand as a gift. Yes, the picture is shown on-screen.

Plenty of adult chortles were heard when learning that Fred wasn’t afraid to use the word “ass” in behind-the-scenes conversation. In the sometimes uncouth world of TV production, Fred Rogers could still be simpatico with anyone on earth. We see proof of this further during his profound connection with Koko the gorilla in 1999.

Most insightful was the reaction of some of the kids in the audience. During a segment where we see Fred Rogers fully delineate the complex feelings of children, a young girl (maybe 13 years old) from a family sitting in front of me leaned over and put her head on her dad’s shoulder.

Yes, today’s kids get Mister Rogers, no matter their age. For me, this was as gratifying as the film itself as a reflection on our youngest generation.

Those in my immediate vicinity withheld crying during the movie, though I could hear some definite sniffles in the front of the theater. Most of this occurred during the last quarter of the film where you fully realized the profound impact of Fred Rogers’ legacy on the world and also where we went wrong.

I’m not afraid to admit my eyes became misty based squarely on remembering watching “Mister Rogers’ Neighborhood” with my parents every weekday as a youngster.

A Microscope On the Events from 1960s to Today

The film isn’t afraid to parlay clips of the real world occurring during the show’s run. We see Robert F. Kennedy’s assassination, on up to 9/11, with clips of how Fred Rogers bravely and astutely addressed these issues for kids throughout the decades.

In this regard, it made me think of a connective string to one of the great films of the 1990s: “Forrest Gump.”

Now, I don’t want to make the connection of Fred Rogers ever being exactly like Forrest Gump. Fred was infinitely intelligent and fully comprehended the realities of the world. Similarities come in their docile demeanor and helping people see the world from a unique perspective as the world fell apart around us.

In “Forrest Gump”, we saw Forrest show us that you can still find truth, beauty, and goodness in the world amid the world’s horrors. At the time of the film’s release, a lot of people didn’t get this message. Being the 1990s, we were still perhaps naïve to what lied ahead in the 2000s and 2010s where our culture took a slow nosedive into more uncivil behavior and general social chaos.

Within the last 24 years since “Gump” played in theaters, more people finally took this message to heart. No doubt it explains why it plays so often on cable to this day.

“Won’t You Be My Neighbor?” provides a similar deep-seeded message as the world we live in now hits us squarely between the eyes. We’re desperately trying to find a way out of the pit by changing human behavior and the type of things we see in the media every day.

One thing the film changed for me was the initial perception that Fred Rogers’ genuineness was singular and not possible with anyone else in today’s times. We’re reminded in the film that this likely isn’t true and many like him exist out there. If you go by the enlightened reactions of the audience who saw the film with me, they now realize what they need to do to improve the world around them.

The People as Fred Rogers

It’s safe to say we at least won’t see a TV host like Fred Rogers in our lifetimes, particularly because of the precedents set in what people watch. Some might find disagreement from the movie’s perspective that all entertainment for kids has gone to the dogs since the days of “Mister Rogers’ Neighborhood.”

Being one who was lucky enough to grow up during the glory years of “Sesame Street”, “Mister Rogers’ Neighborhood”, and “The Electric Company” (the PBS triumvirate on weekday afternoons), it’s hard to find disagreement on where entertainment for children has gone. The sense of imagination and attention to feelings that Fred Rogers tapped into just isn’t there in TV where ratings are everything and careful social considerations are placed on the backburner.

This is why “Won’t You Be My Neighbor?” is really a call to action for all of us to fill in the role of Fred Rogers, or at least as much as possible. Spouting snark and having a political warrior attitude is easy to catch on in the more cynical times we live in. The film gives us a reminder to check ourselves in how we’re truly reacting to today’s increasingly maddening news.

I have no doubt every person who sees “Won’t You Be My Neighbor?” will become a better person after seeing it, including our ever-important Millennials.

Even though we can’t change everything happening in the world, we can still process things differently so it won’t turn us into cynical beings with no sense of self or meaning.

After you process this, you’ll see how prescient the show was about the world that was soon to come. The scene of King Friday XIII attempting to build a wall in the Land of Make-Believe was Fred Rogers as eerie prognosticator of the world he wouldn’t live to see. In this sense, you can almost be grateful he didn’t have to see where we are now.

Despite Mister Rogers helping us see the world differently, he used his show as a form of helping himself. Through his puppets, we now know he worked out his own complex form of therapy in expressing the feelings he couldn’t express in childhood.

“Mister Rogers’ Neighborhood” was ultimately a symbiotic helping program for generations of the last 50 years and for Fred himself.

Now “Won’t You Be My Neighbor?” turns the tables and becomes a form of therapy for all of us or any empathetic audience.